The Five Tenets of Taekwondo 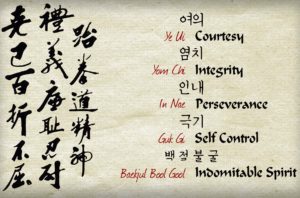 One must be able to define right and wrong and have the conscience, if wrong, to feel guilt.

There is an old Oriental saying, “Patience leads to virtue or merit.” “One can make a peaceful home by being patient for 100 times.” Certainly, happiness and prosperity are most likely brought to the patient person to achieve something, whether it is a higher degree or the perfection of a technique, one must set his goal, then constantly perserve. Robert Bruce learned his lesson of perseverance from the persistent efforts of a lowly spider. It was this perseverance of tenacity that finally enabled him to free Scotland in the fourteenth century. One of the most important secrets in becoming a leader of Taekwon-Do is to overcome every difficulty by perseverance. Confucius said; “one who is impatient in trivial matters can seldom achieve success in matters of great importance.”

This tenet is extremely important inside and outside the do-jang, whether conducting oneself in free sparring or in one’s personal affairs. A loss of self control in free sparring can prove disastrous to both student and opponent. An inability to live and work within one’s capability or sphere is also a lack of self-control. According to Lao-Tzu “the term of stronger is the person who wins over oneself rather than some one else.”

“Here lie 300, who did their duty,” a simple epitaph for one of the greatest acts of courage known to mankind. Although facing the superior forces of Xerxes, Leonidas and his 300 Spartans at Thermoplyae showed the world the meaning of indomitable spirit. It is shown when a courageous person and his principles are pitted against overwhelming odds.